Showing posts from 2019
Show all

October 27, 2019
When I first started making Empanadas, it was suggested to me to simply use pie crust dough.  Even though it got me by, it had a serious drawback.  Empanadas, for the most part, are a food that is meant for travelling and pie crust dough is too weak for the task.  This resulted in quite a few broken Empanadas. I looked into this and found a recipe for Masa de Empanadilla in the book The Foods and Wines of Spain by Penelope Casas.  She was an early proponent of Spanish Cuisine in the modern era. She traveled all over Spain researching and collecting recipes.  I've been using this recipe for the dough for quite a few years with great success. 1 Cup Water ¼ tsp Salt 3 Tbsp Butter 3 Tbsp Salad Oil 2 ½ Cups Unbleached, All-Purpose Flour 1 Egg In a saucepan, heat the water, salt, butter, and oil over a medium flame until the Butter is melted. Remove from the heat. Add the flour all at once and stir until completely incorporated. Beat in the Egg with a wooden spoon unt
Read more

Eat, Drink, and Be Merry: Food in the Middle Ages and Renaissance 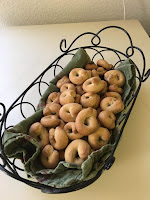 Reproduced from: https://tavolamediterranea.com/2019/08/09/bread-for-the-gods-taralli/ Farrell Monaco,Archaeologist Ingredients: 4 Cups Whole Wheat Flour 1 1/4 Cup Water 1/3 Cup Olive Oil 1/3 Cup White Wine 2 tsp Salt 1 tbsp Fennel Seeds Preparation:     1. Preheat your oven to 400 F / 200 C / Gas Mark 6     2. Mix all of the ingredients above together in a large mixing bowl and knead the wet and dry ingredients together until you have a cohesive ball of dough. You should end up with approximately 1 kg of dough. You may also do this on a cutting board or a clean surface. Let the dough stand for 30 minutes to bind.     3. Cut the dough into 1/4 sections. On a clean surface or a cutting board, place 1/4 of the dough. There’s no need to dust your work surface as the dough contains enough oil to keep it from sticking to the board.     4. Begin to roll each piece of dough slowly, back and forth, until you extend the dough outwards to your left and right. You are aiming t
Read more
More posts