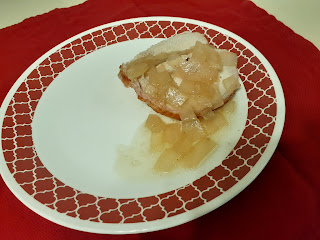 Original:
Si vols fer porriol preii ceba tallada e ab sal cogua en aygua freda e escurri la moltes vealdes, e fes !a hi poch bullir ab greis de porch e piiys nlit lii ritiagre e pebre e sal e aygua, e no sia massa forts, e mit hi tots los quarters entregues
[El Libre de Sent Sovi, LXI, Ed. Luis Faraudo de Saint-Germain, c.1325, 1952]
Translation:
If you want to make onion sauce, take chopped onion, and cook with salt in cold water.  Rinse it many times, and boil it a little while with pork fat.  Then put in vinegar, pepper, salt, and water; they shouldn’t be too strong.  And put in all the quarters [of the birds] whole.
[El Llibre de Sent Sovi/The Book of Sent Sovi, LXI, c1325, Trans: Robin Vogelzang, 2008]
Ingredients:
Onion
Salt
Pork Fat (Lard/Grease)
Vinegar
Pepper
Water
Redaction:
Chop small or dice Onion.  Place Onion in pan with cold Water with Salt.  Bring Onion to a boil.  Rinse Onion and place back into pan.  Add Lard/Pork Grease and fry Onion.  Add Vinegar, Salt, and Pepper.  Temper with Water.  The sauce should not be too strong.
Notes:
Onion sauce: sauce made with chopped onion, cooked – boiled, scalded, or fried – and drained; spices and other ingredients, dissolved with a liquid such as vinegar or broth.
Chopped onion: Chapter (65) of the Llibre d’aparellar specifies thst the onion should be cut in very small pieces, and Chapter 86 of the Llibre de potatges indicates that it should be ground; both cookbooks, furthermore, signal that it should be mixed with wine, while the present recipe, below, adds vinegar.  Beyond these variants, the recipes of the Barcelonan collection – especially the second – present other disparities, although comparing the three evinces the same source.
Cold water:  the onions should be added to the water when it is still cold, not after it has boiled.
Boil it . . . fat:  the pork grease is added to the pot where the onion has boiled, as we find in Chapter 87 of the Llibre de potatges or Chapter 78 of the Llibre del coc; on the other hand, in recipe 72 of the Barcelonan cookbook, or 79 of the Llibre del coc; the onion is fried.
the quarters:  this refers to the quartered birds that the sauce accompanies, probably the partridges in the previous recipe.
[El Llibre de Sent Sovi/The Book of Sent Sovi, LXI, c1325, Trans: Robin Vogelzang, 2008]
The recipe is fairly easy to make.  The recipe recommends to serve this sauce with poultry.  We served it with a pork roast and it worked very well.  The Onion should be fried slowly to tenderize and caramelize it.   Vogelzang notes variations to the recipe in which the Onion is directly fried instead of boiled first as well as substituting Wine for the Vinegar.
Bibliography:
“Porriol.” In El Llibre de Sent Sovi / The Book of Sent Sovi: Medieval Recipes from Catalonia, edited by Joan Santanach, translated by Robin Vogelzang, 154-5.  Barcelona: Barcino-Tamesis, (c.1325) 2008.
Sent Sovi The Salsa Project