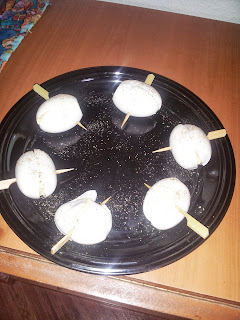 [An Anonymous Andalusian Cookbook of the 13th Century]
Translation:

Take as many eggs as you like, and boil them whole in hot water; put them in cold water and split them in half with a thread. Take the yolks aside and pound cilantro and put in onion juice, pepper and coriander, and beat all this together with Murri, oil and salt and knead the yolks with this until it forms a dough. Then stuff the whites with this and fasten it together, insert a small stick into each egg, and sprinkle them with pepper, God Willing.

Redaction:
Hard Boil the Eggs. After they have cooled, slice the Eggs down the center and remove the Yolks. Make sure to keep the paired halves together. Mix the Yolks with the rest of the ingredients. Once mixed together thoroughly, fill the Egg Whites with the mixture. Put together the original Egg halves and secure them with a toothpick. Sprinkle Pepper over the finished Eggs.

Notes:
This is another Medieval recipe that I served to our company that visited us from Reno. I originally started with ten Eggs, but only six survived until the end. Note to self: Overestimate. If there are extra Hard Boiled Eggs, so be it. Murri is a common ingredient in Moorish Cooking, but I did not have time to make it for the recipe, but I found that Soy Sauce is regarded as an acceptable substitute. I am planning an A&S class in the near future on making Murri.
Medieval Cooking