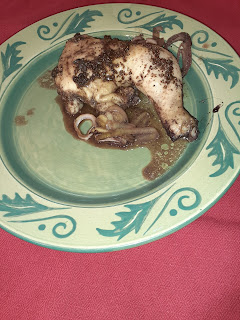 Translation:
Draw the chicken from the rear and cut it into quarters. Pound pepper, lovage, a little caraway, pour on liquamen, flavour with wine. Arrange the chicken pieces in a ceramic dish, put the sauce over the chicken. Dissolve fresh laser in warm water and put it straightaway on the chicken and cook it. Serve sprinkled with pepper.

DRESS THE CHICKEN CAREFULLY AND QUARTER IT. CRUSH PEPPER, LOVAGE
AND A LITTLE CARRAWAY MOISTENED WITH BROTH, AND ADD WINE TO TASTE.
PLACE THE CHICKEN IN AN EARTHEN DISH POUR THE SEASONING OVER IT, ADD
LASER AND WINE LET IT ASSIMILATE WITH THE SEASONING AND BRAISE THE
CHICKEN TO A POINT. WHEN DONE SPRINKLE WITH PEPPER AND SERVE.

Interpretation:
Toast Caraway and Celery Seeds. Grind them in a Mortar. Mix Asafoetida in warm Water. Mix Wine, Fish Sauce, Spices, and Asafoetida slurry together. Arrange Chicken in an Oven Dish and Salt it. Pour mixture over Chicken. Place in oven and cook until done making sure to baste periodically. Remove from oven. Sprinkle with Pepper and serve.

Notes:
Parthian Chicken refers to chicken being prepared in the Parthian style. This uses an ingredient found in the Parthian Empire (modern day Iran) called Parthian Laser also known as Asafoetida. Asafoetida is native to modern day Afghanistan and would have been available in the Parthian Empire. Vehling also notes that the name may come from a particular chicken such as a Bantam which is common in the area. The recipe isn’t specific about the Wine. I’ve seen both White and Red used in recipes. I chose Red Wine.

I overestimated the amount of Caraway and Celery Seed to use. I would use half as much next time. On the other hand, I undersalted the Chicken. Salt isn’t mentioned in the recipe, but it is usually assumed.