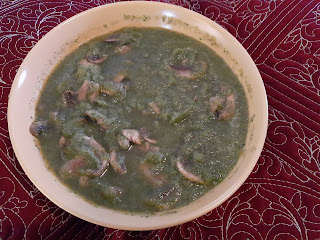 If you want to make sauce of mushrooms that are boiled, pressed, and fried with oil, make the sauce like this:  take onion, parsley, vinegar, and spices, and mix it with vinegar and a little water.  Make pieces of the mushrooms, to fry, or serve with a fried mixture, and then put them in the sauce, or serve them grilled with salt and oil.

“take . . . water: the onion, parsley, and spice, with a little vinegar; have to be ground, as detailed in Llibre de potatges, 145; the resulting mixture is dissolved with vinegar – or wine, according to the Llibre d’Aparellar (17) – and with a little water.”

“Or serve . . . oil:  it is possible that this recommendation indicates a different way to serve the mushrooms, cooked on the grill and with salt and oil as condiments, and not fried with the sauce described; in the same way, the recommendation made just above (<<or serve with a fried mixture>>) surely suggests the possibility, as an alternative to serving them with sauce, of adding the mushrooms to a sofregit.”

The recipe calls for the Mushrooms to be boiled, then pressed to remove the excess water.  I put the Mushrooms in a towel then pressed them between two Cutting Boards.  I do not have a Mortar large enough for grinding the Onion and Parsley mixture so I relied on a Blender.  The recipe mentions to add a little water but I found that the Onion and Parsley released a lot of water.  I ended up removing some of the excess water.  The recipe was not specific on what spices to use.  Salt, Pepper, and Coriander gave a pleasing flavor.